Pat and Joe Jude found their family’s home vandalized with swastikas, racial slurs and the phrase “white power.” Joe is black and Pat is white and they think they were targeted because they’re an interracial couple. (GoFundMe)

The damage was substantial but fixable, but for Pat and Joe Jude, the hateful things spray-painted on their family’s Cincinnati home brought back some of their most painful memories.

The Judes had just returned to Cincinnati after visiting their daughter in Chicago. The house was hers, but she had moved after getting a promotion a year ago and asked her parents to help rent it out. Pat and Joe planned to retire there, according to a GoFundMe page the couple set up.

In the meantime, they rented the house and new tenants were about to move in. The Judes knew they’d be out of town a few days for Thanksgiving, so they locked it up tight.

When they returned, the house was in a shambles.

Vandals had poured cement into the stove and down the tub’s drain. Walls and staircase railings were kicked in. A ceiling had collapsed.

Most troubling: “White power,” die n—–” and swastikas were spray-painted on walls.

“They wrecked every room,” the couple wrote. “Nothing was spared.” Vandals used a plunger to make sure cement went down the pipes of the house. (GoFundMe)

Joe is black and Pat is white. The couple married 34 years ago “at a time when you know it wasn’t real acceptable,” Pat told the Cincinnati Enquirer.

[‘You’re helping her? I’m going to kill you’: Good Samaritan shot while aiding a dying woman]

The burdens continued as they raised two biracial children in the South and then in Cincinnati. Their son committed suicide in 2010, they wrote on the GoFundMe page.

“He was treated very racist because he was a biracial young man,” the GoFundMe page says. “He was called the n-word, and other unacceptable terms by his fellow students and residents of the town. One of his teachers even called him stupid in front of the entire class. Unfortunately, with all of this negativity, we lost a wonderful young man.”

When they saw the words spray-painted on the vandalized home, they immediately thought of the vitriol their son experienced before he died.

“That is just raw hatred. Anger is one thing, but raw hatred is a different thing,” Joe Jude told Cincinnati NBC-affiliate WLWT. 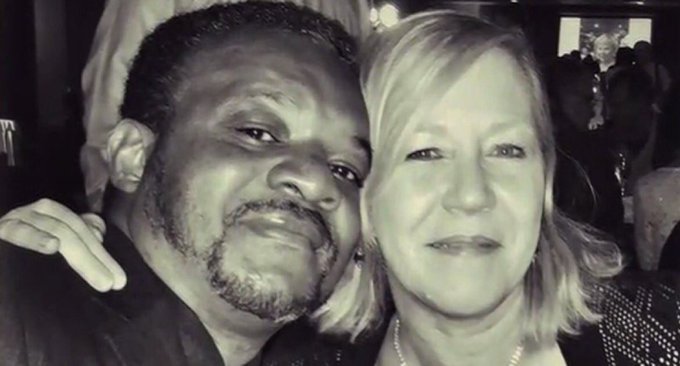 They think the vandals entered through an upstairs window and spent a lot of time at the house, wreaking havoc from the upstairs bedrooms to the basement. They broke pipes and turned on the water, collapsing a ceiling. They used plungers to make sure cement went deep down the drain before it hardened.

No one has been arrested.

“We had wanted to move to that home in a few years but this situation hurts so much I don’t know if we’ll ever be able to do so without remembering the hate that was brought into our home,” the couple wrote. “People need to learn not to look at the color of peoples skin but at the persons character. We are all Americans, we are all in this together.”

On Friday, they set up the GoFundMe page, hoping to raise $2,000 to cover the cost of the insurance deductible. By Sunday evening, the site had raised more than $26,000.

And words of encouragement poured in from across the country.

“I saw this on Facebook and will be donating,” one woman wrote, saying she had asked family members to donate any money for her Christmas present to the Judes’ campaign. “I have everything possible that I need and the only thing I need right now is for this hate to go away. You have support across this country!”

Cincinnati Mayor John Cranley told the Cincinnati Enquirer that police are searching for the vandals.

“I am deeply disturbed by the act of hatred perpetrated against this family,” Cranley said in a statement. “This crime is not only an attack on an innocent family, it is an attack on our values.”

Others offered to donate their skills and time to help with repairs. One neighbor said she left cookies on the couple’s porch.

[‘We’ve never had anything like this’: Racist, threatening message left on door of black church]

A day after their initial post, Pat Jude wrote an update on the GoFundMe page, calling the outpouring of support “amazing.”

“After the death of our son my husband lost faith in humanity and now with this horrible senseless hate crime, it seemed hopeless,” she wrote. “With the outpouring of love from our family, friends and strangers especially during this time of year, has helped us realize that the people who did this were in the minority and the majority of Americans are so kind and don’t believe in hate and racial inequality. …

“Thank you from the bottom of our hearts.”