A gunman shot a Sikh man standing in his driveway in Kent, Wash., on Friday, March 3. The gunman reportedly told the Sikh man to “go back to your own country.” Kent Police chief Ken Thomas held a news conference shortly after the incident, calling the shooting “surprising” and “extremely disappointing.” (Reuters)

The 39-year-old Sikh man was working on his car in his driveway in Kent, Wash., just south of Seattle, when a man walked up wearing a mask and holding a gun.

According to a report in the Seattle Times, there was an altercation, and the gunman — a stocky, 6-foot-tall white man — said, “Go back to your own country,” and pulled the trigger.

Authorities are investigating the shooting as a suspected hate crime, the newspaper reported.

The victim, whose name has not been released, was shot in the arm about 8 p.m. Friday. His injuries were not considered to be life-threatening, the newspaper reported. The man who shot him is still on the loose. Kent police have reached out to the FBI and other law enforcement agencies for help. 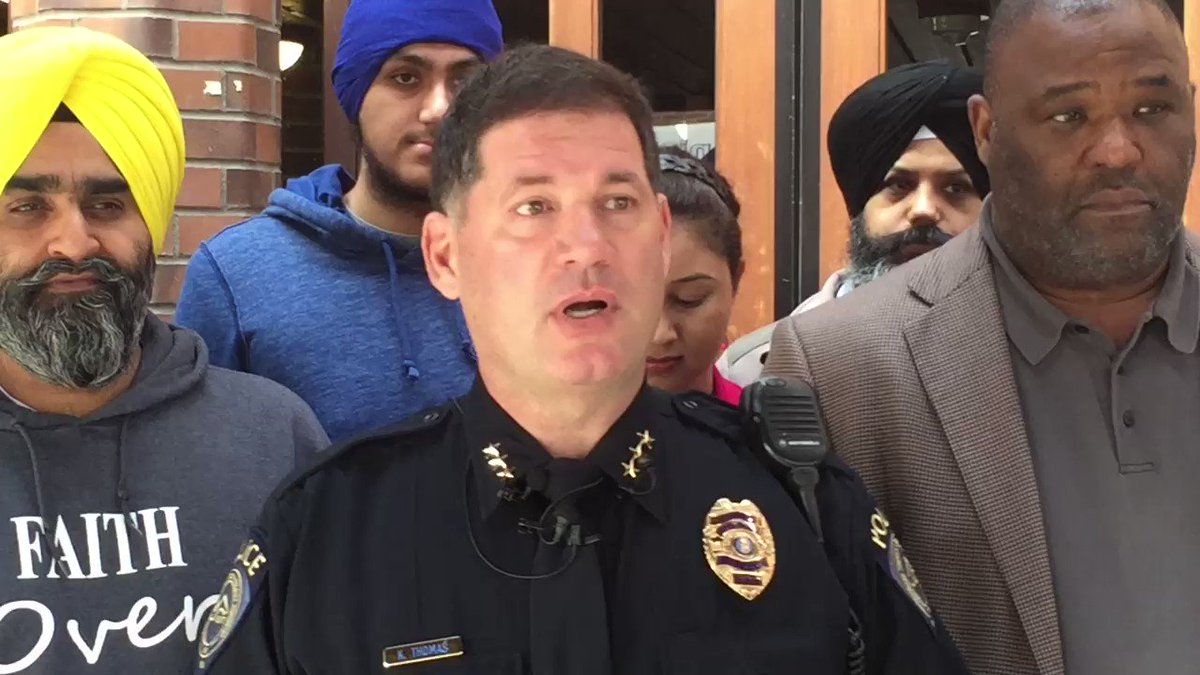 A leader of a coalition of Sikhs in the United States stressed the need to treat the incident as a hate crime but said more needs to be done across the nation to combat bigotry-related violence.

“While we appreciate the efforts of state and local officials to respond to attacks like this, we need our national leaders to make hate crime prevention a top priority,” Sikh Coalition interim program manager Rajdeep Singh Jolly said in a statement emailed to The Post. “Tone matters in our political discourse, because this a matter of life or death for millions of Americans who are worried about losing loved ones to hate.”

India’s minister of external affairs said she had talked to the victim’s family, who said he was “out of danger and is recovering in a private hospital.”

I am sorry to know about the attack on Deep Rai a US national of Indian origin. I have spoken to Sardar Harpal Singh father of the victim./1

In the Kansas case, Srinivas Kuchibhotla, 32, died of his wounds. Alok Madasani, 32, was released from the hospital Thursday. A third person, Ian Grillot, a patron at the bar, was shot and wounded while trying to intervene, The Washington Post reported.

Widow of slain Indian man: ‘He did not deserve a death like this.’

Sunayana Dumala, whose husband Srinivas Kuchibhotla was shot dead at a crowded bar in a Kansas City suburb on Feb. 22, spoke at a news conference on Feb.24. The accused gunman reportedly yelled “get out of my country” before firing at Kuchibhotla and a friend, who was also Indian. (Claritza Jimenez/The Washington Post)

Authorities there were also investigating whether the shooting was motivated by bias, a widely held suspicion among the victims’ family members.

The father of the injured Indian man said the rhetoric of President Trump contributed to negative feelings in the nation, and he implored parents in India “not to send their children to the United States.”

JUST IN: White House, speaking about Kansas shooting, says any loss of life is tragic but absurd to link to president’s rhetoric

Family members of the two men said in interviews that they feared the current atmosphere in the United States. “There is a kind of hysteria spreading that is not good because so many of our beloved children live there,” said Venu Madhav, a relative of Kuchibhotla. “Such hatred is not good for people.”

Madhav said that “something has changed in the United States.”

Relatives of the Indian men told the Hindustan Times that they were friends who had not antagonized the alleged shooter, Adam Purinton, and that Purinton had instead “picked an argument” with them and suggested they were in the country illegally. Purinton is charged with first-degree murder.

“They tried to tell him that they had done their [master’s degrees] in Kansas in 2006 and had been staying there with valid work permits,” a relative said.